In the mid-life analysis, I have no one to blame but myself.

I foolishly assumed that by confirming the availability on the website and by paying my money, the tour would actually happen. And barring that, that someone would contact me if there were issues, changes, cancellations.

I’ve been standing outside the Hotel Continental for 45 minutes and the tour hasn’t turned up. I’ve tried emailing them. I can’t reach them by phone. Not sure if it’s my phone or the Hotel’s desk phone or if these people don’t exist. This has been a lousy start to my holiday.

The guy next to me in the plane last night… this morning?… This guy in 22J was from a Tokyo bank who had been relocated and living in Saigon for the last seven years. He told me the plus to Vietnam is that there not a lot of violent crime; the downside is the massive corruption. He says when they finance a deal, say it’s for ten million, two million always vanishes off the top. Then there’s various “miscellaneous charges” wherein local officials and workers line their pockets with their own cuts of the deal. I said I was surprised he was still financing after seven years there. He shrugged and said it was the cost of doing business in Vietnam.

I guess I should’ve taken that as a warning extending even onto local tours. There’s a lot of different terms for charging me for a service that either doesn’t exist or doesn’t happen. One is theft. Fraud is another. Aggravating is the most apt at the moment.

I walked the 40 minutes to my airbnb figuring I should take in some of the HCM City besides the area outside the Hotel Continental. 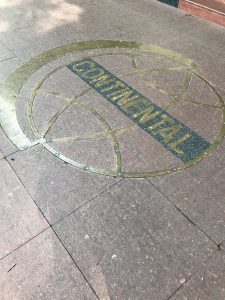 The first thing I noticed was all the scooters. 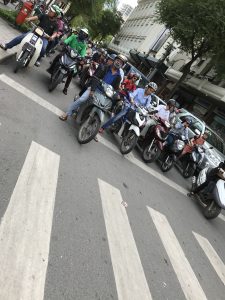 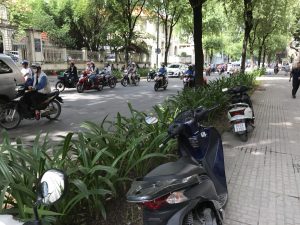 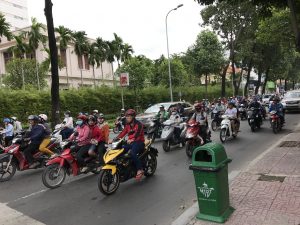 The second thing I noticed is that sidewalks are secondarily for pedestrians to walk on the side of the road.  Sidewalks in Ho Chi Minh are really shortcuts for scooters and there are no lanes. 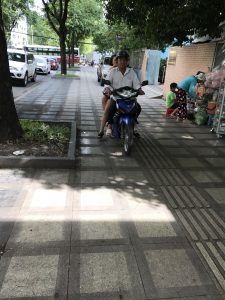 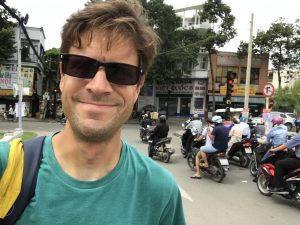 Bumped and jostled by scooters repeatedly, again this is all my fault as I’m carrying my duffle and rucksack. It wasn’t the money I was trying to save by skipping the taxi or scooter ride and going by foot; I wanted to experience the city. And having scooters careen at, around, and occasionally through me FEELS like a Ho Chi Minh City experience.

I decided to sit by a river and tap out some thoughts. Sure, sure. It was party an excuse to catch my breath through the humid exhaust pipe that is this town’s literal atmosphere. But it also just felt like something I should do. Take a moment, feel the city around me. 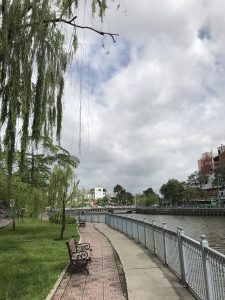 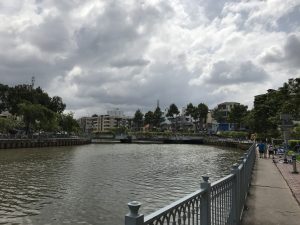 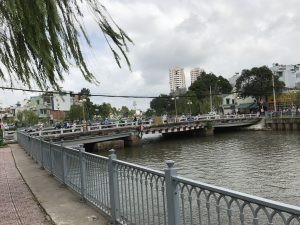 I did eventually embrace my inner local, that kamikaze dash endemic to city dwellers the world over. You see it in NYC, in London, in Madagascar and yes you see it here in Vietnam. Sometimes the only way across is to take a leap of faith and fling oneself once more onto the breach.

I didn’t die. But it was close. My reward was this: 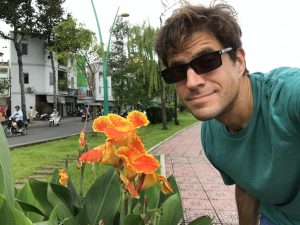 I’ve wandered many a back alley trying to find this airbnb. Googlemaps was no help; the locals I asked at various apartment buildings and storefronts seemed utterly baffled by the address.

I finally came across a woman who was poking her head outside and saying, “welcome.” I’m guessing it’s the right place (it looks kinda, sorta like the photos) but who knows? I’ll most likely be dead in the morning or missing a kidney or something.

When I messaged the airbnb proprietor asking questions, I found his reply to be… passive aggressive? Maybe it’s a language barrier.  Or maybe it’s me; it’s always me. 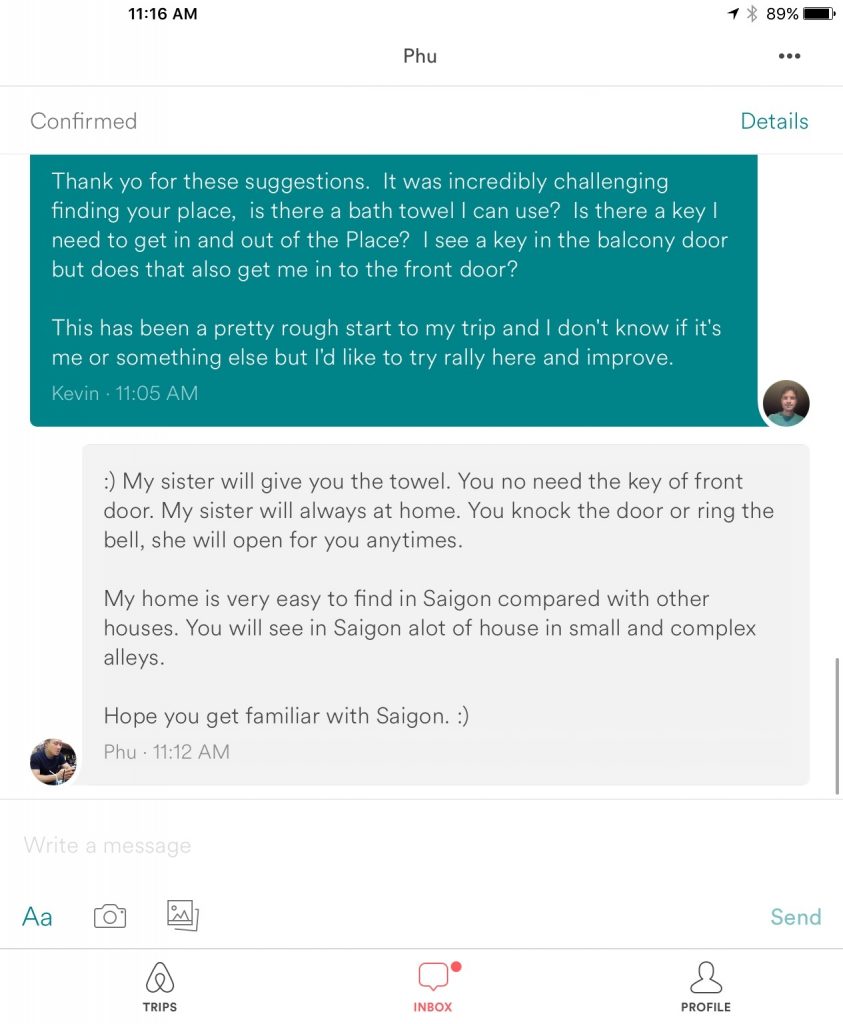 I’m unimpressed with Saigon and already am looking forward to leaving. Maybe I’m the ugliest of Americans but I don’t think so. I just kinda want to be treated as I would treat somebody.

Though maybe I’m only getting what I deserve and though I *think* I’d treat people well maybe in reality I’m as passive aggressive awful as can be.

This ultimately then remains all my fault.