The first time I traveled abroad was… yipe!… more than 20 years ago.  At that time I instituted several rules whilst on the road.

One rule was about food.  The first rule about eating abroad is that no one talks to me about what I’m eating.  I’ll eat anything at least once, just don’t tell me what it is beforehand… nor, perhaps even afterward.  The few exceptions, which oftentimes prove the rule, is that I don’t eat easily discernible heads, beaks, or feet.  And of course if I eat coconut I could die.

With that in mind, I ventured forth to forage for meals in and around Saigon.  My airbnb host had a few suggestions and they seemed worth taking as opposed to just a random guess on what to have. 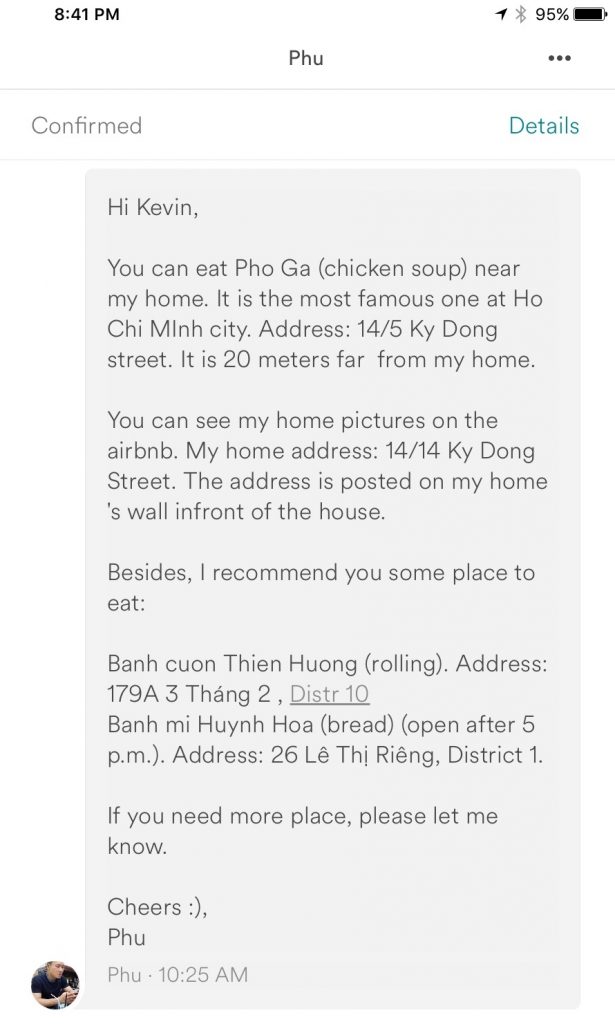 At lunch I tried the pho ga close by.  I found it… bland.  I kept adding spices and chili sauces and any other condiment on the table to try and get some flavor and heat into the thing.  Ultimately however the pho ga was a huge shrug from me. 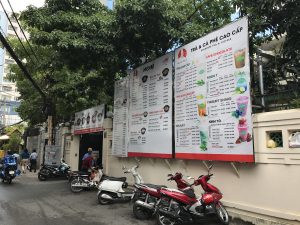 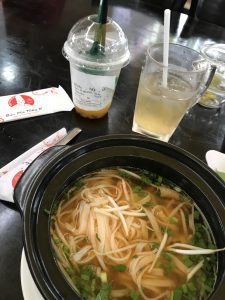 To be fair though I’m not a huge soup fan.  This is particularly true on days where the humidity is so high that any rain that falls doesn’t cool things off, it just makes things stickier and more oppressive.  I had brought a poncho with me and, man, do I hate those things.  It’s like wrapping oneself in saran wrap … if you could microwave or bake things wrapped in cellophane.  The heat and humidity is trapped inside those ponchos and I’m pretty sure that’s how you poach a Kevin.

From there I walked down to the War Remnants Museum.  This would prove to be a very strange, discomforting but perhaps necessary excursion in Ho Chi Minh City. 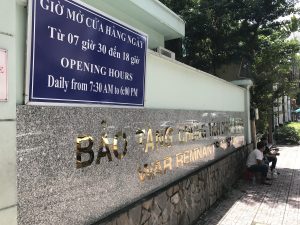 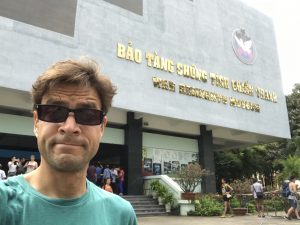 I’d been told about this place, warned even, as war museums in general are a reminder of the horrors we humans can inflict on others and on nature.  Sometimes it’s for the good of all humankind and sometimes it’s, well, not.  Museums of any interest always have a bias, an angle to the story they’re trying to tell.  But then, doesn’t every form of communication, from political speeches to the text you send your significant other to the email to your boss to the order at a restaurant.  There’s always subtext, always more to be conveyed and intended than can be encapsulated in the letters and words themselves.  Semiotics and General Semanticists and the like for such theories.

The point at this moment though is that in visiting this museum, it’s easy to spot the biases/spin/intention.  It’s a different perspective and agenda than I might have in the USA.  Here the Vietnam War is viewed as the War of American Aggression, a fight for freedom and independence against a bullying superpower.  And the communism propaganda can be a bit thick, though a Viet Cong perspective looking at the US museums might say the same thing about Deomocratic jingoism, though for the record I much prefer and like the American ideals of inalienable human rights among which are life, liberty, and the pursuit of happiness.

It was weird visiting this place.  I recoiled in horror at tales of torture and graphic barbarism, on both sides of the conflict but this being the Vietnamese take the atrocities were far more serious coming from the US.

I didn’t take a lot of photos; I didn’t get all snarky and selfie and silly.  There were plenty of folks doing that though, grabbing photos of the damaged and abandoned US Army materiel in the courtyard outside.  I just didn’t feel right doing so… though there are once again exceptions that prove the rule:

One of the more obvious takes on Communist Propaganda comes in the form of this placard: 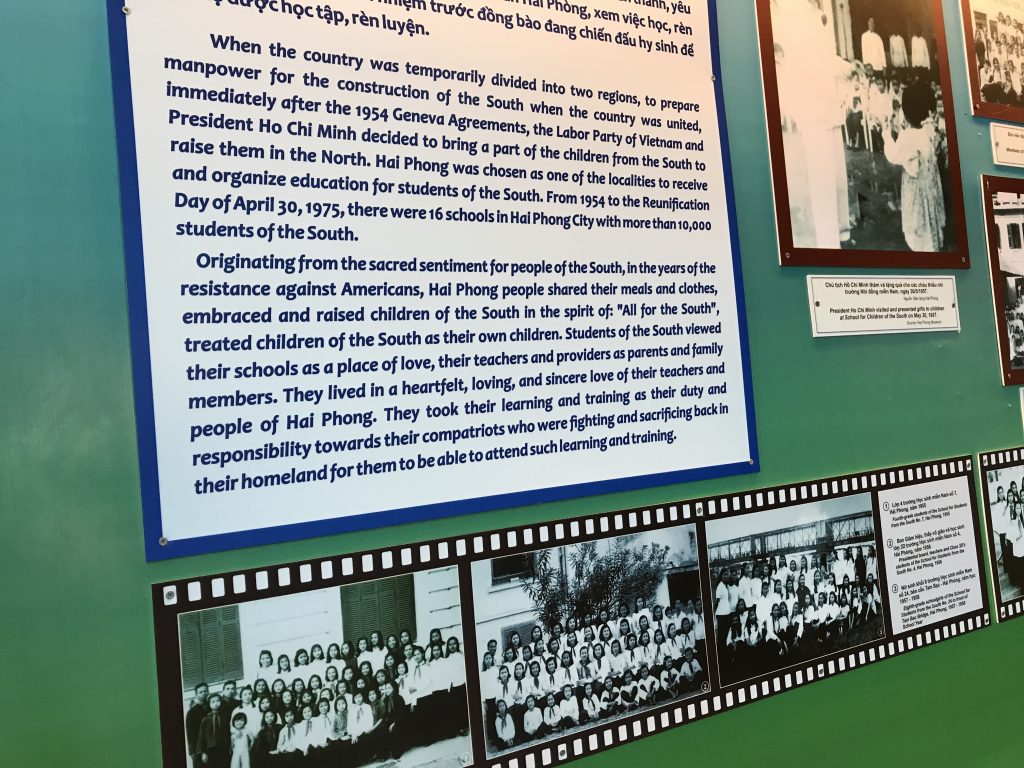 I don’t care what indoctrination you received.  I find it difficult to believe teenagers ANYWHERE — East, West, Jupiter, Alpha Centauri — “…lived in a heartfelt, loving, and sincere love of their teachers and people of” their adopted hometowns.

The Historic Truths exhibit was undergoing upgrades and improvements… for some reason, in an era of “#FakeNews” and in light of contemplations of cultural biases inherent in storytelling/education, I found this hilariously important.  The historic truths need to be revised… because truth after all is assuredly different than facts. 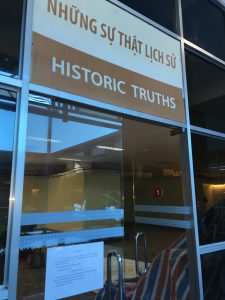 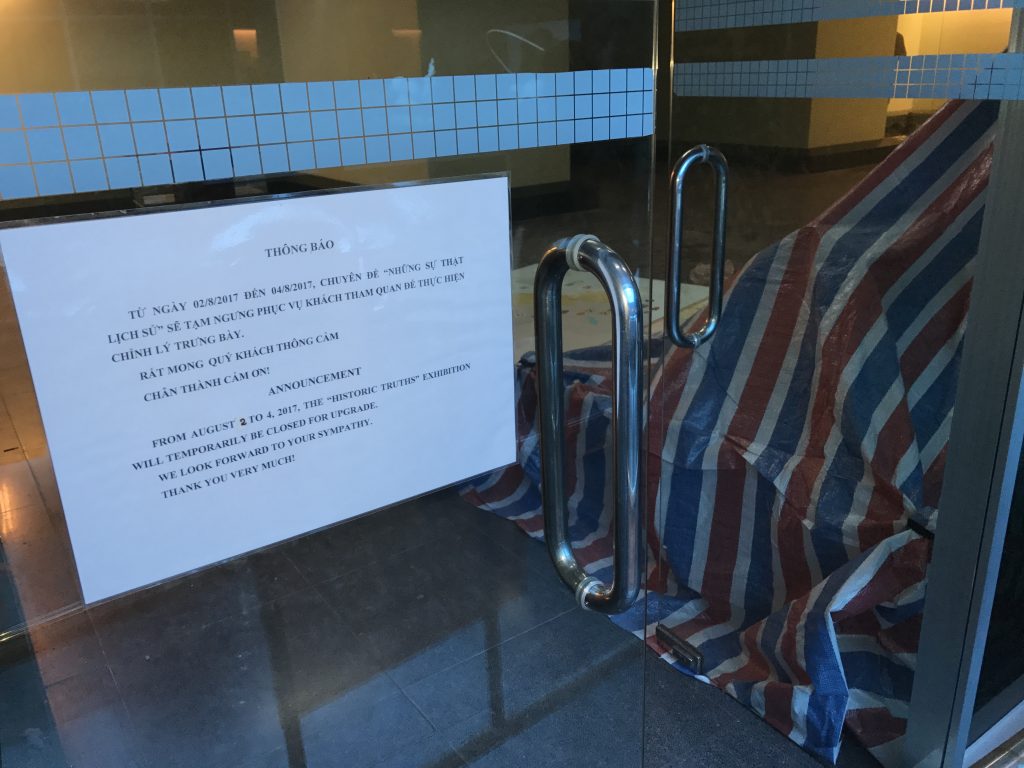 I was struggling with jetlag and sleeping in a half couch of an airline club.  I needed caffeine as well as I had been sticking with water as much as possible to fight dehydration.  But sometimes the monkey on my back needs some sweet, sweet caffeine and who am I to deny the monkey?

I was struck by the price differential between Coca Cola Light and Pepsi Light. 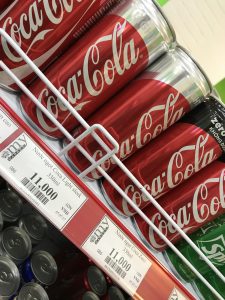 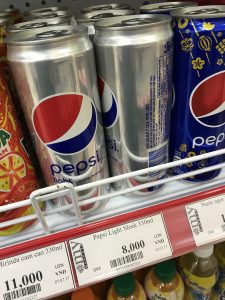 I decided to save a few Vietnamese dong and went with a Pepsi Light.  The formulas in foreign lands are always different so I didn’t feel like it was a true betrayal of my brand… since Coca Cola Light isn’t exactly Diet Coke.

Doing the math later, it turns out I saved USD13 cents by going for the 3000VND cheaper Pepsi.

Despite pounding the 330ml can, I couldn’t keep my eyes open.  A nap was necessary… and even though I had set my alarm to grab an early dinner, the Radar sound effect did little to rouse me.  I finally got out the door at 7:30 PM.

There was a drizzle in the air.  My stomach wasn’t adapting too well to the cruddy inflight meals and lack of sleep.  I had thought I’d just grab a quick bite close to the my airbnb… but a cab was literally dropping someone off in front of me and looking for their next fare.  I decided to hit the bahn mi place Pho had recommended… and which a quick google search indicated was highly regarded by others in town as well.

I’m leery of cabs, not just in foreign lands but in places where I speak the language.  Buses too — there’s an inherent distrust issue I have with riding in vehicles with non-regular routes.  I know what you’re thinking.  “Buses have regular routes and schedules.”  And while that’s true, they sometimes only stop when passengers pull the string or tap the button to request a stop.  I never know 100% where I am in a vehicle in an unknown city and thus am always worried I’ll have missed my stop because the bus simply didn’t stop as no one requested a stop.  Paranoid much?  You bet.  But that’s why if I’m on foot or driving myself I feel like I can course correct and eventually find the place I’m trying to get… or choose to give up and try something else. 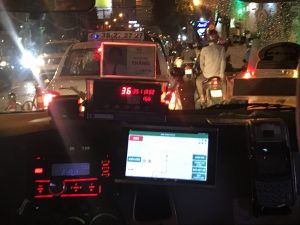 But I didn’t want to deal with the rain and I didn’t want to get lost like this morning in my quest to find my airbnb.  It was dark out and any visual landmarks I had established looked different in neon or accent light. Banh mi Huynh Hoa was a real hole in the wall… but there was a line and it seemed like THE THING to do if I wanted banh mi.  I waited my turn, determined that if I had spent VND50,000 to get here, I might as well wait for a sandwich.

As we shuffled forward, the drizzle ebbing and flowing, I tried to suss out how to order.  Bahn Mi is the Vietnamese word for bread/baguette so surely I had to specify the filling.  My phone had no WiFi signal so I couldn’t figure out how to google translate whatever it was that I was in the mood for.  From lunch I knew “ga” was “chicken” but I really kinda wanted a more vegetable heavy sandwich…

And then I realized this place seemingly offered but one type of bahn mi — a house specialty mixture of jamon (got that from a list of French on a sign — assuming it was a list of the ingredients; I shouldn’t have been surprised that some French may still work given the bahni mi baguette was introduced during French colonialsim), pate was on the list, looked like from the assembly line there were cucumbers, sprouts, and… I’m not sure what — a mystery meat type thing. Folks were ordering by simply specifying the number of bahn mi sandwiches, typically gesturing with index fingers for “one” and when a guy in front of me held up two fingers, the order taker/expeditor of the line seemed a little taken aback.  I figured the filling must be pretty, uh, filling… not that I was going to go for two bahn mi anyway.  The followup question after determining a patron was ordering one (or, zut alors!, TWO!), was “chili?”  Most said yes.  And I, thinking of my blando pho, assuredly was when in Vietnam going to do as the Vietnamese would do.  At my turn I ordered one and answered “yes” to chili.

It turned out to be a pretty tasty sandwich. I had seen reviews from folks online hailing it as the greatest sandwich they’d ever had.  I’m not that breathless… although as I walked back to my room in the light drizzle, I found the oppressive humidity to make breathing a little difficult.  That wet sucking of air that comes in those kinds of conditions.   I thought of this weekend’s marathon in DaNang, a city promising to be even more hot and humid than Ho Chi Minh City.  I’ll deal with that when the time comes.

Instead, I enjoyed the crazed night traffic… which was like the crazed day traffic only with scooter headlights bopping and weaving through crowded lanes, oblivious to pedestrians, the night air pierced with a never ending syncopated honking horn melody. Tomorrow, I head to the Cu Chi Tunnels and take a trip along the Mekong Delta.