You don’t understand the humiliation of it… to be tricked out of the single assumption that makes our existence bearable. That somebody is watching. We are actors, we are the opposite of people. […] We need an audience!

-Player, Rosencrantz and Guildenstern are Dead

Friends, runners, Geneveans.  I come not to bury Son of a Bach… I come to kinda, sorta, back-handedly praise them?

I had assumed this heavy metal styled cover band for the works of Johann Sebastian Bach were “a thing.”  It felt like a thing.  Read that description again — doesn’t that sound like “a thing?”  The band consists of two brothers — one on guitar, one on drums.  And they… well… try and out Falco Falco’s Rock Me Amadeus, flip the symphonic Rolling Stones, and ultimately put on a show about Bach. 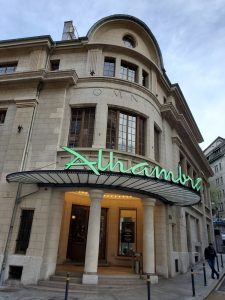 Doors were to open at 7 for an 8 o’clock show.  One listing shows the duration as 240 minutes (!!) which had to be a misprint I thought. 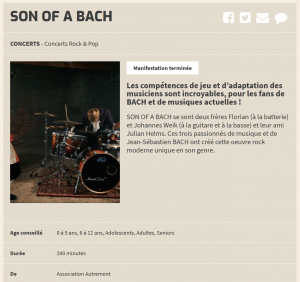 But unlike the 3 hour 40 minute opera I opted out of due to length, part of me was intrigued by a Bach-metal-marathon of FOUR HOURS and felt like if it was going to be 4 hours that was definitely something to see.  It wound up being closer to 95 minutes with a somewhat inexplicable 15 minute intermission.

So I buy my ticket — 30 CHF or a little under $30 USD.  The doors are open but nobody is there.  Oh, sure, the ushers are there, checking my wristband just after I received it from the ticket booth and walked two steps.  Inside there was… no one.  I mean, literally no one.  I was alone.  In a giant foyer.  Eventually a guy with a camera showed up — he was sporting a CREW shirt so I assumed (rightly it would turn out) he was the band’s videographer. 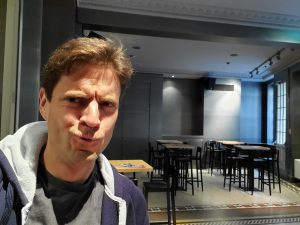 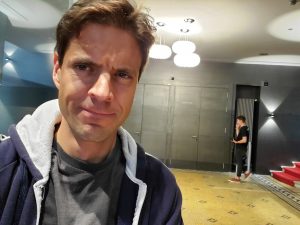 The theater doors opened around 7:40 and I went inside.  It was a decent sized concert hall with pretty comfortable foldable theater seats arranged in rows.  As a General Admission, open ticket I planned on getting here a little early to figure out a decent vantage point and not get smooshed into a mosh pit of Bach-heads.  Turns out I needn’t have worried.  I sat down in the 4th row, a little off center, figuring, that seemed about right 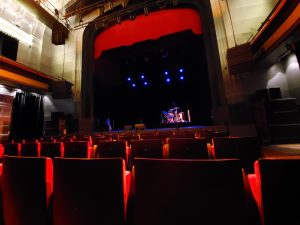 Slowly a few others trickled in but I got the impression everybody knew each other.  Patrons 2 and 3 certainly knew patrons 5, 6 and 7.  I texted family and friends giving them real time attendance figures.  It was a big moment when we broke double digits with patrons 9 and 10’s arrival a few minutes before curtain.  That they sat right in front of me in a cavernous and almost empty theater was gobsmacking.  Seriously?  Seriously?!  But out of spite I refused to move.  It would’ve been oh-so-easy for me to do so.  I had a pick of literally hundreds of seats, and that doesn’t even count the balcony!

As the bell ringer indicated the show was about to begin, I double counted the crowd — 14 of us were here to see Son of a Bach.

Maybe they’re just not that big in Switzerland?  I hear they’re big in Germany.

How to describe Son of a Bach beyond the heavy metal infused coverings of JS Bach’s works?

A quick bit of backstory: Twenty some years ago I wrote a stoner comedy spec script in a week’s time called “Two Guys and Bach.”  It was about two guys (obviously), 20-somethings, who needed a new roommate… and got stuck with a Belushi-inspired never-explained eternally 45-ish Johann Sebastian Bach.  My Bach was sick of his “old hits” and was always annoyed at people standing at his concerts for those “silly ditties” and sitting down for his new sounding work.  He was kinda a heavy metal Bach too.  But he also through the magic of storytelling made the two guys realize what they had to do to grow as people and learn valuable lessons and also outwit a drug lord (who also was a big Bach fan!).  It was a surprisingly tight script for having been written in a week and I really thought in the era of “Dude, Where’s My Car?” I had a shot at it being “a thing.”  It… was not.

I kept thinking about that script and its place in the universe as I watched Son of a Bach.  I was prepared to pooh-pooh and snigger my way through the performance.  Even moreso as I came to realize that 13 of the 14 of us in the crowd knew the band or were their family and had probably gotten comp’d tickets and I was the only one who paid to see them.  But then I realized how much these friends and family probably paid to support the brothers.  Whatever my take on them — and to be honest, they were technically quite good I thought as musicians — they were out here, doing something they clearly loved, having spent hours and hours putting this together.  And even though only 14 of us were in the audience, they still got out there and played.  Not perfectly mind you — they could use some work on their banter for example.  I say this because there was NO banter whatsoever. 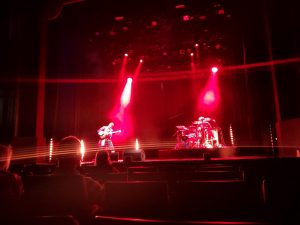 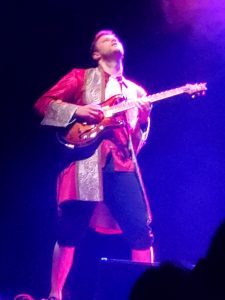 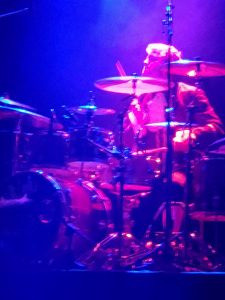 They’d played a song or two and then they left the stage, replaced after a VERY long light fade out/in on a solo violinist.

Again, technically a marvel, Julian Helms used electronic looping of what he just played to create background tracks for his ongoing fiddlin’.  It was a bit improv and a bit planned out.  I had seen such techniques employed to great effect in Joe DiPietro’s Ernest Shakleton Loves Me.  Here, some of Helms’s tunes were good, some were “meh.”  But he played with heart, feeling, passion and gusto.

As he wrapped up a short set, the lights dimmed, he left and the house lights came on.  We all sat there.  Confused.  It had been about 40 minutes — 20 minutes or so for each performer.  Was that it?  Had I paid a little less than a dollar a minute of show tunes?  Finally the house manager came out and spoke to us all in French.  I’m pretty sure I heard “Pause” and “quinze” which I took to mean 15 minute intermission.

I felt myself conflicted.  Here were guys working hard to entertain, maybe even enlighten.  And there were so few of us here.  And I wasn’t even sure I should be there.  I had this deeply philosophical internal debate on the meaning and meaninglessness of life.  It was a true existential crisis of conscience… both personally and yet at a macro level as well.  What’s it all about, Charlie Brown?  What’s the point?  Does it even matter?  We sit on the brink of a global financial meltdown due to crazed trade war saber rattling and ill-timed tweets.  We sit on the brink of an actual world war with geopolitical tensions and Santayana-ian repeats of history past with rising and unchecked authoritarian regimes.  The natural world is threatened on a human scale — by that I mean, I believe the Earth will survive but I’m not sure we will given cataclysmic climate change created by our own actions.

And yet… here were these guys.  Doing what they loved.  Giving it their all even though it felt like it was for 13 of their friends and families and one random guy who walked in off the street.  Is there method to that madness?  Is there not hope to be gained from that?  Or is it just… words, words?  Much ado about nothing?

I had planned on writing this last night but I wasn’t ready.  I’m not sure I’ll ever *be* ready.  Maybe Son of a Bach changed me… if all of life’s moments are viewed through a prism that says choice A leads to one timeline and choice B leads to another, then everything we do matters in some way.  Why not choose to do something we love even if all it does is spark our own internal joy?  Because maybe, just maybe, we our choices impact the lives of others.  Even if it’s just family and friends… and one random guy who walked in off the street.

Before I go once more exploring, I sneaked some video of the performance.  Who knows if I was allowed to or not.  The band DID have their own videographer as I said.  Still, I figured it unlikely they’d kick me out.

So these youtube videos should give a flavor of the sound and vision of Son of A Bach.