The main focus of the morning was on previewing the route for tomorrow’s marathon.  Apparently the owners of the Moshi Club, the original starting location which was 1km from where we were staying, wanted to jack up the price for the rental fees.  Marie Frances wasn’t about to pay triple the previously agreed price so reworked everything to have the Lutheran Uhuru Hotel and Conference Center, where we’re staying, host the pre- and post-race festivities. As well as serving as the new starting line.

This last minute (or last day) adjustment meant the distance markers that had previously been painted on the trees had to be adjusted mentally (as I guess the local race director wanted to repaint the numbers but Marie Frances was confident the Americans were smart enough to figure it out… though it was phrased a bit more… um… antebellum-ish?).  Anyway, at each kilometer marker we were told we had to subtract one.  Thus the 1KM marker right outside the hotel was actually going to be 0KM and the  new starting line. 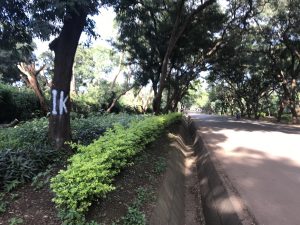 And when we got to the 2KM marker, we were told it was actually 1KM.  This was repeated at 3KM (which is now 2KM) and 4KM (which is now 3KM) and so on.  The turnaround was moved to a place right by a large shipping container and a world map.

They had to paint a new turnaround arrow on the road for us… which seemed marginally unnecessary as we were told there’d be a water stop and someone there to tell us to turn around.  But better to be safe than sorry. 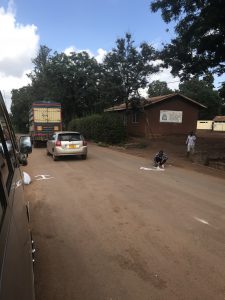 And as we turned around and headed back the way we came, we passed more kilometer markers and were reminded to subtract one.  I had finally kinda had it with the whole thing and tried to make light of it to hide my growing frustrations.  So when we reached the 7KM marker before anything else could be said, I used my game show host voice and said, “And here we are at 7KM which means we are *really* at what kilometer marker, folks?”  To which all intoned in unison, with a bit of comic relief, “6!”

And then I said “how many here are doing the half marathon?”  A few more hands went up.  “So how many 10K-ish loops are you going to do?”  “Two!” was the rejoinder.

And yet at the 9KM marker we were reminded that we needed to subtract one to get to 8KM.

The turnaround at this point remained the same and it was just past a rickety old bridge, built by the Germans in late teens or early twenties and still in operation today.  Marie Frances told us she loved this bridge, not for its aesthetics which has nothing on the Italians, but for its long-lasting feat of engineering.  Me?  It reminded me of that old Universal Studios fake bridge that the tram car would go over and collapse hydraulically for a bit of a thrill. 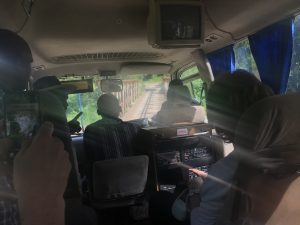 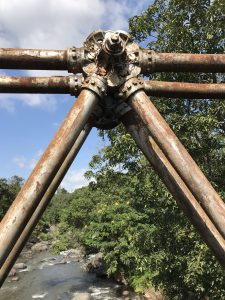 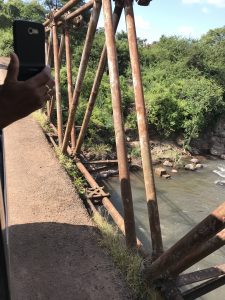 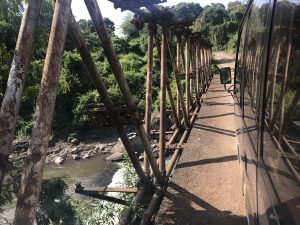 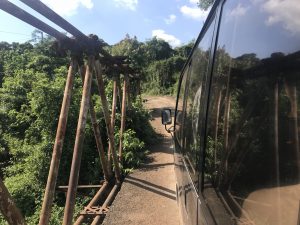 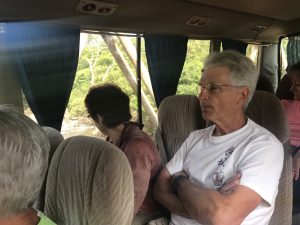 As we turned the bus around and headed back to the hotel, which would now be the end of the 10K-ish loop, Marie Frances told us it was actually 10.5KM so that with four loops the marathoners could get to 42K.  I and several others wanted to explain that a marathon is 42.195KM but Michael, a Latin America DirecTV executive, had tracked the distance on his GPS watch and it was within 0.02 of a quarter marathon distance.  We left it be… albeit I couldn’t resist saying once again – “And that 1KM marker is what, folks?”  “The starting line or the end of a loop!”

Post course review, Marie wanted to take us to an all wooden Cathedral that she loved.  She said the place was under constant threat of termites because it was all wood.  That the diocese was looking at ways to preserve it but it was so hard because it was all wood and so very beautiful.  I have to admit, I’m not a huge church guy, but I was intrigued by an all-wooden cathedral.  I wanted to see the wooden flying buttresses and the idea of an original wooden building from centuries ago sounded neat.  But wherever we wound up, there seemed to be a lot of brick, mortar, and more substantial building materials than just wood. 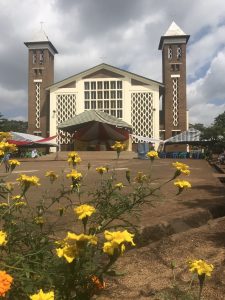 I think it had to be the wrong place… but it was a lovely exterior, done up for a Holy Ghost festival and Catholic conference.

The inside though was a miasma of traditional, modern, and, um, 1960s art deco?  Unlike the orphanage we had seen the day before, the extensions and reconstructions that took place in this cathedral felt like there were overseen by three different architects who all had different stylistic preferences and nobody bothered to see if any of it worked in unison.  Though as always I like stained glass windows for lighting effects: 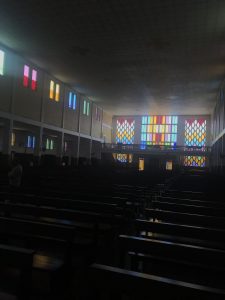 From there it was a publicity photo opportunity with Marie Frances at the street named after her.  It’s apparently the first street in Africa named after an American woman… and it was recently embroiled in a bit of vandalistic scandal.  Last year, someone had removed the sign and renamed it Moshi Blvd, out of spite or political anger or something.  So when Marie and her runners went that year, the street name had been “changed” and she was so embarrassed.  She asked the Mayor about it and was told they didn’t know anyone had changed the name… but when they looked, they saw that yes, indeed, some rapscallion had stolen the sign in the middle of the night and replaced it.  They redid the sign and once again motorists, GoogleMaps, and runners from far and wide could find themselves at the corner of Marie Frances Blvd and the World Peace roundabout. 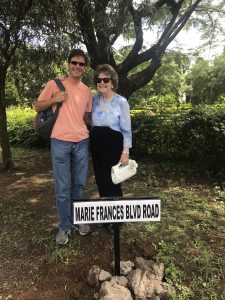 I should point out something that Ed told me about that World Peace painting.  If you look closely, the main land mass of Australia is upside down (it no longer looks like a gorilla with a fez on his head) and Mexico has clearly been the victim of global warming and melting polar ice caps, the beginning of a new world we might call “WaterWorld Beta.” We had a leisurely lunch of pizza at a local Indian/Italian place … I still haven’t had a chance to sample banana stew and am quickly running out of time.  I ate too much as always though did stop halfway through as we had planned on sharing the leftovers with those folks who were wandering the streets of the Old King District.  It all felt a little weird to be honest.  The pizza was okay – fine even – but there was a weird sense of exhaustion over the morning’s activities.

Some last minute preparations were needed to be attended to by Marie – a birthday cake for the June birthday celebration component of the pasta dinner tonight (?!) and a banking error she needed to sort out – so she split off and some people were headed back to the hotel for a rest.  A group of seven (what is it with the number seven on this trip?), myself included, opted to stroll the streets of Moshi to shop and get a feel for the town.  Accosted at every turn by vendors hawking wares, storefronts, and touring services, it was a bit overwhelming.  We did snap a few photos though, such as this one of a makeshift hotel that kinda terrified us all. One presumes the proprietor is Mr. I.T. Pennywise.  But I hear he’s a bit of a clown.

In one souvenir shop I came across this postcard.  I wasn’t willing to buy it and feel a little guilty about just snapping a photo of it but I did buy an overpriced bottle of water from them…. so let’s call it even. I think the lyrics are the most truthful and honest of any song ever written.

Speaking of the climb, a fellow traveler by the name of Dave Cook put together this spreadsheet for his friends and family about the climb.  It’s a great thing and I copied it over as it shows just how bonkers this thing is.  Based on these stats, I was roughly at half the amount of oxygen I’d normally be breathing in Florida when I summited Kilimanjaro.  No wonder I was light headed, dizzy, and huffing and puffing like the little engine that couldn’t.

And for the record: I think Marie Frances is a lovely woman with some incredible stories and true grit determination.  But I also think she’s 80-something and is perhaps not as detail oriented and flexible as she once might have been.  She has a way of doing things and she does them that way… and will continue to do them that way even if it isn’t always necessary.  That’s fine but it can be a bit… much.  I know there’s a bit of exasperation in this post but I’m tired from climbing, from too much wind and sun, from swollen chapped lips, and despite efforts to pump Coke Zero into my system still suffering from caffeine withdrawal.  So maybe I’m the one that’s too much at the moment.

Oh, who am I kidding?  I’m too much at MOST moments.

But that’s the way it is.  Good night, and good luck.