Last year Marie Frances forgot the bibs for the 27th Annual race so rather than let them go to waste, she used them for this, the 28th Anniversary event.  Which is why my bib says I’m running the 27th Anniversary event.  There’s no date on it so it’s not a huge thing… and the race shirts, a white sorta cotton blend tee, have the right information.  So, ya know, close enough.

I’m not sure what to write here.  There’s a long, self-pitying but all-too-accurate piece I wrote in my head during the event that I’m debating about putting “out there.”  I’m just not sure it’s either interesting or useful to others.  Perhaps it’s just some self-discovery truth that should be kept on the inside.  The truth is, this was a harder event than I thought it would be when we drove the course yesterday.  There were two short hills I was mentally prepared for, if not exactly in peak physical condition given the prior week’s climb shenanigans.  But there was a long, gradual incline that just kept sapping my energy each loop, such that I was worn out by the cumulative effects of time, space, and distance.  Again, I’m not sure I’m ready to go into what epiphany I had on the course… which wasn’t really an epiphany and more of a confirmation of my fears.  So I’ll put a pin in this paragraph and hit the ol’ carriage return to start a new thought.

Do kids even know what a carriage return means?  Is it like the 3.5” Floppy Disk icon for saving a file when they have no idea what a floppy disk is anymore? 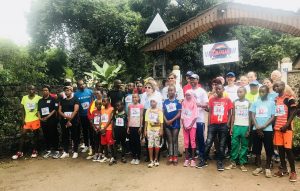 The locals were blazingly fast… though I kept up with them for the opening few feet.  It helped that within three steps off the proverbial starting blocks, one runner cramped up and caused the kind of pile up that you’d normally only see in a Michael Bay movie.

Yeesh — That’s a terrible turn of phrase.  I hate it but I’m too tired to try and fix it.

I wound up not taking a whole lot of photos as my phone suffered from surprisingly high humidity and resultant sweat that made trying to slide to open the camera app akin to trying to walk in a straight line on the Yellow Brick Road.

Anyway, here’s some shots from along the way.  Ed snapped my photo soon after the first turn around as he was hot on my heels, thus I tried to take some photos of my fellow Americans as we went round and round the loops.  It took me a while to figure out I should be taking photo bursts to try and get at least one shot in focus, thus earlier attempts are more blurry and later ones suffer from humidity on the lens giving a lot of things that glowing soft focus you might see in pictorials of a soft-core nature…

Sweet Pete!  What is up with me today? 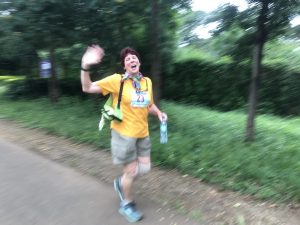 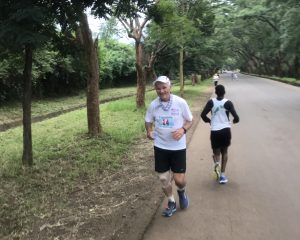 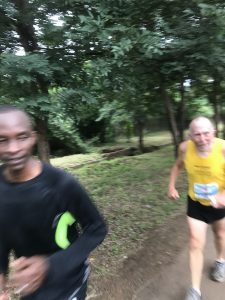 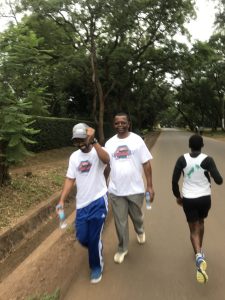 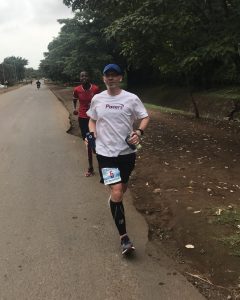 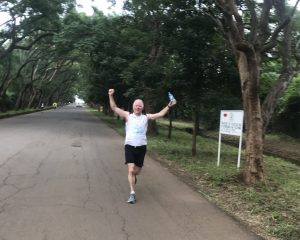 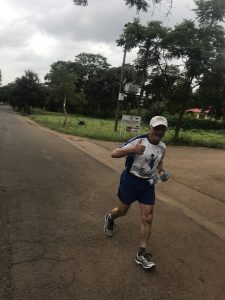 And here’s a few stories from the round:

There wasn’t enough water on the course, despite there being 10 water stops on the 10K loop.  They just simply ran out… and I heard from Marie Frances later that she went out and bought more to restock as best she could.

In my opening loop, I and a Tanzania runner were trading off positions as we came to an intersection.  A motorcycle taking the turn onto our road nearly took us both out.  The traffic cop manning the area tossed his nightstick at the fleeing bike to try and, I don’t know?  Do this?

I was the lead American until about mile 12 when Dave A, who had been nipping at my heels for those opening dozen miles, passed me looking stronger than… is there a good reference I can make here?  I’m too tired… he just looked super strong.  Anyway, by mile 13 he was nothing more than a shimmering glimmer in the distance and then I only saw him as we passed each other going opposite ways on the turnarounds.

As the race wore on, I felt every slip, fall, faceplant, shoulder bump, ankle aching twist and turn from the Kilimanjaro climb.  My back hurt.  My butt hurt.  My side hurt.  My quads questioned the existence of god.  Every part of me that had plummeted into the dirt, screed, snow, rock, tree root over the past week or so of hiking screamed out in pain.  It was a rough run… and part of that involves the aforementioned epiphany/self-discovery that I don’t want to get in to.

Jeez, I sound like Holden Caulfield.  And that’s never a good thing. 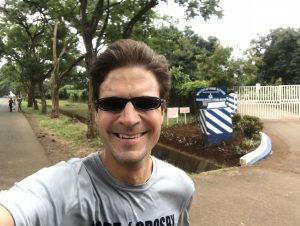 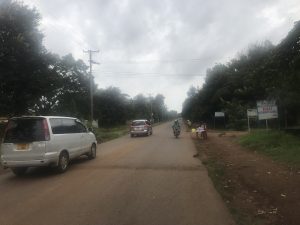 And a final note: I placed second in the foreigner category, well behind the Tanzanians who had finished a good hour or more before me.  I also think I was about 18 minutes behind Dave.

Here’s a shot from the awards ceremony when I picked up my 2nd Place  (foreigner) trophy (I lthink I actually placed 27th overall?) There were some issues on spelling, distances, and counts.  Mine were fine but I felt obliged to try and make things right for folks who had worked so hard and done so much… not only for me but for others on this trip.  So I bullied and corralled and did my best to put together a “punch list” of things to get reprinted/sorted for some folks.  I’m sure I’ve only made things worse.  This has been an experience I won’t soon forget due to hijinks and snafus and some good people caught in wacky, weird moments.

I’ve had a time to be sure… but I’m so ready to get home.  I’m ready to rejoin the world after having been off the grid for so long.  Let’s see what the dawn brings.

To close, though, let me just leave this right here – in a club of one, I’m the first to finish the “Road To….” Marathon Series.