As you’ll know if you’ve read the recent posts, I just completed the Antarctica Marathon, and thus have now run a marathon on all seven continents. It was a project years in the making, costly from financial, physical and emotional standpoints. But it was a thing. It was a very personal thing for me but one I got to share with family and friends and strangers throughout the years.

Long ago I paid $200 and joined a club called the Seven Continents Club. 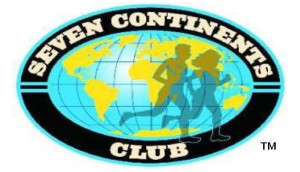 This organization was started by and administrated by Marathon Tours, a group I have used several times for runcations and adventures. Thom Gilligan, founder of both the tour operator and this SCC club, had set out rules for membership and defined the terms and conditions for finishing. And that’s how it should be — it’s his club, it’s his rules, and they’re pretty clearly defined. I may not agree with all of them but the rules are the rules. I am fortunate enough to say I did it all according to the club rules and therefore I am officially and proudly a Seven Continents Club finisher.

Having said that, some people on my trip to Antarctica were running their seventh continent but for one reason or another didn’t qualify for finishing according to the SCC’s rules. Some had run ultras that didn’t count for marathons according to the rules.  Some had run a race that had them finishing after the official closing time but they did in fact finish.  They were a little bummed about it as they had worked so hard to achieve their goal and now had to go about finding another event in some far flung locale to officially finish. But in chatting with them, I reminded them that it was their own individual goals that mattered. They didn’t need the SCC to validate what they had done.

Clubs are great, don’t get me wrong. I’m a proud member of several running clubs after all.  The clubs are motivators, they offer communities of support, and they sometimes have great swag. But they’re not the be all, end all.

As a founder and sole member of the Road To… Marathon Series, I think I am somewhat uniquely qualified to say something about this. If a particular running club doesn’t fit with your current goals or ideas, you can break off and start your own club. It’s like a member of a rock group going off to do a solo side project. Running and indeed life itself is all about what you choose to make of it. You alone are the arbiter of you happiness.

To be sure, it’s a truly wonderful feeling to be recognized and validated by others.  But it is at least as, if not more, important that you feel validated and recognized by yourself. Personal Records (PRs) in running are, after all, personal. They’re yours. Yes, yes. It’s nice to place (or I imagine even win) at an event. But the only real competition is with yourself. That’s true on the course and in the normal course of day to day living. Keeping up with the Joneses or the Usain Bolts is all well and good and fun and competitive, but it’s what you decide for yourself that matters most.

Still, I wanted to do something for a few people I met who were sad about not qualifying on their Antarctica trip.  They have done and continue to do amazing things and there’s no reason they should be sad because the SCC says they haven’t officially finished the seven continents. So I made up a new logo for a new club — the 7&7 club. Seven races on seven continents. For a while it was going to be called the Pangea Racers because I liked the idea that it was all about the PRs. Ultimately though I opted to go with a simple numerical notation. So here you go, folks. A different kind of club that recognizes your achievement for having run a race on all seven continents. 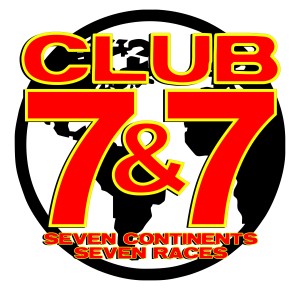 And because I had CorelDraw! open to mock up a logo anyway, I decided to do one for me. I double checked my stats and sure enough I ran a marathon in under four hours on all seven continents. So doing the math, I “founded” my own club of one, something that was just for me. If I can try and run a race on roads wherever Bob and Bing and Dorothy Lamour found themselves traveling, I figured why not add another club to my roster? 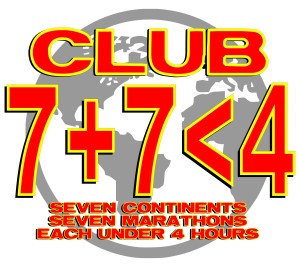 Of course, anytime somebody mentions ANY club, I can’t help but think of Groucho Marx.  He has a famous quip, and there are a number of variations and circumstances attributed to this, but he’s supposedly to have said:

I don’t care to belong to a club that accepts people like me as members.

In the end, it’s what you believe, what you value, that matters most.