It began, as things often do, on a whim.  There was no real plan, no intention, but once considered it snowballed into something bigger and better.

In 2013, I decided to run the Rio Marathon with my then girlfriend.  It seemed like a grand adventure, an exotic location and a cool place to go and see.  And at some point in the back of my mind there was this thought bubble rising to the surface.  We’re on the road to rio, it popped.  The Road to Rio, just like Bob and Bing.  Just like Hope and Crosby and Dorothy Lamour.  Just like that, indeed.

And so I had it in my head it would be funny to run in a racing shirt that proclaimed I was HOPE/CROSBY/HANNA. 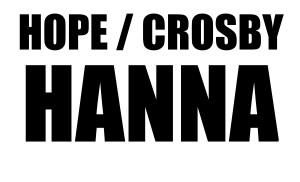 And from there it was just a short leap to the idea of running all of the places Bing and Bob went in the “Road To…” movies. 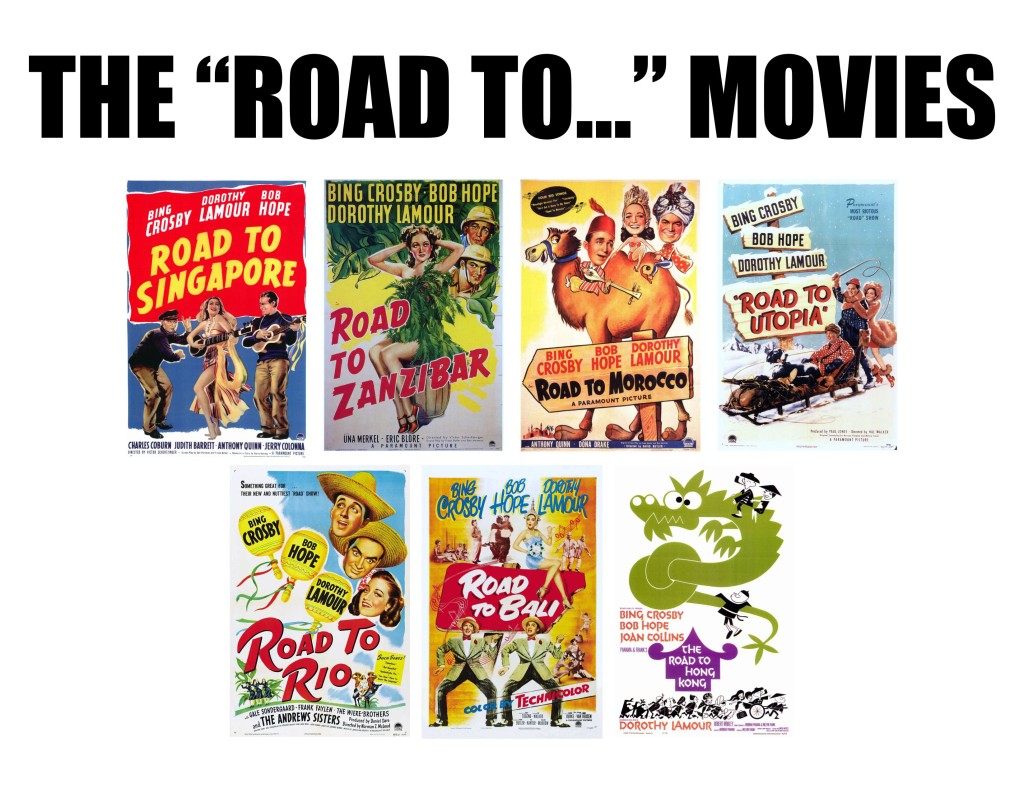 I’ve always been a fan of them, their anarchic one-liners and camaraderie, their spirit of fun and good times.  And that’s something to aspire to in running.  Plus it was a great excuse to see the world.  I’d long been on my 50 States quest in the USA and it seemed like a funny take on a challenge goal.  When people would ask me what I would do after running the 50 states, I thought, “Oh, I’m running the Road To Movies” made for a great rejoiner.

Years ago I took a one-off class on dazzling conversation.  I’ve proverbially dined out on that Saturday morning session more than a few times.  To put it succienctly, a dazzling conversationalist is a dazzling listener — always ask questions of the other person and put the spotlight on them and they’ll think they had the most meaningful conversation imaginable.  Alternatively, tell people you’ve taken a dazzling conversation class and it becomes an ice-breaker discussion point that enables everyone to laugh together at the ridiculousness of it all.  I tell people I was the class of Saturday… AM.  It seems to work pretty well… and now that I’ve shared the information with you, you’ve pretty much gotten your doctorate in power speaking without having to pay the course fee.  You’re welcome.

Anyhoo, to be able to say I’m running the “Road To… Marathons” adds a dash of individual craziness that again provides an ice breaker for witty repartee and enables one and all to join in on the fun.  It is a crazy thing to do… and even the most ardent runners and challenge oriented people get a chuckle out of such a feat.  Plus, as I said, there’s worse things to do than see the globe.

While Bob and Bing rarely left the Paramount backlot on their comic misadventures, I’ve as of this writing visited 5 of the places from the “Road Heptalogy.” 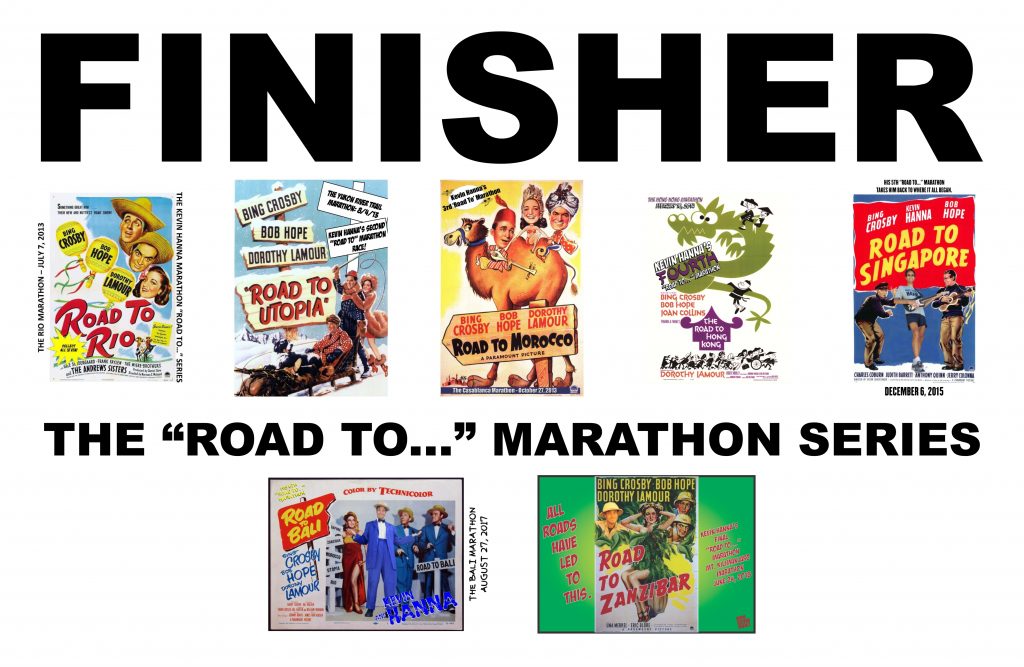 There’s been a few minor “cheats.”  For example, the Road to Utopia was a bit of a challenge as obviously there’s some debate over what we might consider “Utopia.”  As the film predominantly takes place in the Yukon (and actually there’s a fair bit in Skagway, Alaska) I opted to run the Yukon Trail Marathon.  Some day maybe I’ll swing back out to Skagway to run their marathon but in the meantime, I think it’s fair to count it as completed

As of August 2017, there was just one marathon to go in this series.

That was the month I ran The Bali Marathon.  It was an oddly scheduled event.  Over the past few years it’s been held at various times throughout the year.  In 2012, it was April 22nd.  In 2013, June 16th.  2014 saw it held on September 14th, while 2015 was held on August 30th.  But it looks like they’re settling into late summer/early autumn.  Humidity was high, temperatures were hot, but I did it.  There’s even an excessively wordy and photo challenged recap of the posts in the TOURS section of RunKevinRun.

Zanzibar, not space, was the final frontier.  It was a tougher race to work out.  In 2012 there was supposedly a Zanzibar Island HALF-marathon, but it’s fallen out of existence.  Wikipedia defines Zanzibar as “one of the Indian Ocean islands. It is situated on the Swahili Coast, adjacent to Tanganyika (mainland Tanzania). The northern tip of Unguja island is located at 5.72 degrees south, 39.30 degrees east, with the southernmost point at 6.48 degrees south, 39.51 degrees east.”  Further, “As a semi-autonomous part of Tanzania, Zanzibar has its own government, known as the Revolutionary Government of Zanzibar.”  Given this, I’m looking at the Road to Zanzibar as leading through Tanzania.  As a result, my current pick for a marathon there is one of the Kilmanjaro marathons.  Typically one is in February and the Mt. Kilmanjaro event is usually in June.  I opted to run it in June 2018, making this the finishing move to complete the “Road to…” Marathon Series.

So far as I’m aware, I’m the only person to have attempted this challenge at the moment.  Because, really, who else would be looking to do this?  In a global population of around 8 billion people, I bet there probably are others who are doing it even if they don’t realize they’re doing it.  But I can’t be sure about that.  As a result, let’s call this a club of one… at least unofficially.  Not that there IS an OFFICIAL “Road To…” Marathon series adjudicator.  I guess I could be.  But I don’t want to arrogantly presume….