I suppose if you say it enough times, it’s bound to be true eventually… that seems to be the red state philosophy of long time Republican bulwark Orange County, CA. [Full disclosure — the OC is much more purple these days, having gone for Hilary Clinton in 2016 and Biden in 2020… but the local “GOP” remains strong].

At the OC Marathon today, there were two big lies being peddled repeatedly along the course:

Perhaps the spectators were just overly enthusiastic and under-informed about the course layout. But I believed them about the hill thing the first time I heard it… doubted them the second time… and by the SEVENTH hill I was pretty sure somebody should have phoned the fire department because all of these folks’ pants were on fire.

But sure enough, we did finally crest a last hill.  Where that was along the course, who can say?  I suppose it depends on what your definition of “was” is [Full disclose – equal time diss on political parties].

As for the “you’re almost there” uttered throughout the course… maybe space and time have different rules and properties in the OC. Because when the first spectator to tell me I was almost there was standing beside the mile TEN marker. Uh… I don’t know what makes this fella think SIXTEEN POINT TWO MORE MILES is “almost there.” By far the worst but not the only physics denier. I heard I was almost there from police officers, small children, and even a person holding their puppy. I have to admit, I didn’t want to let a sleeping dog lie so I am making an assumption that the dog would’ve be honest. 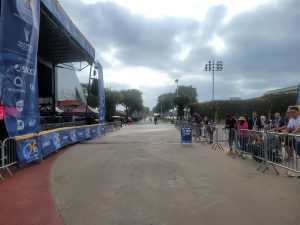 The day that was…

An early morning bus ride to the start line.  This bus had seat belts that dug into my back… and the leg room of a Spirit airplane. 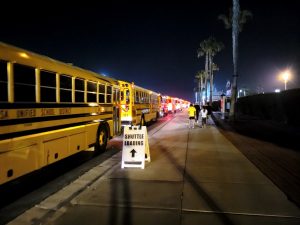 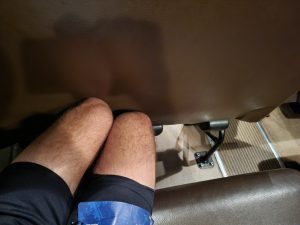 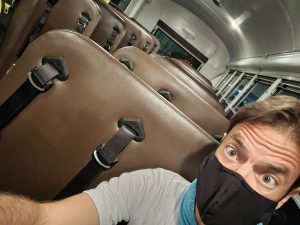 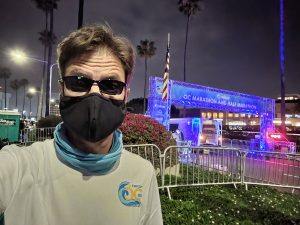 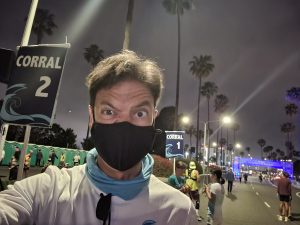 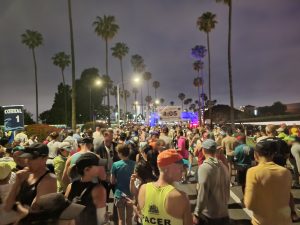 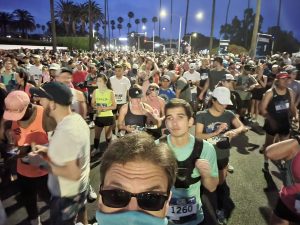 The highlights of the course were certainly in the opening miles along the coastline and marina. 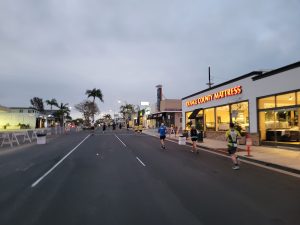 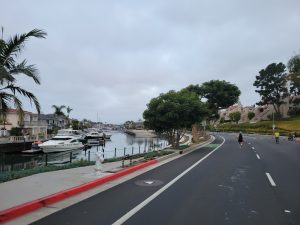 From there it was a lot of bike paths and neighborhoods… 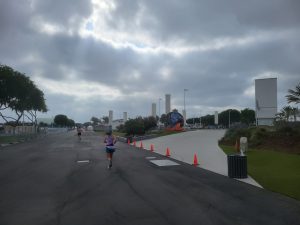 I did get to high-five a dinosaur though… Here’s a photo of me truly being “almost there.” And then I was done.  Not a lot of masks but I tried to be socially responsible and wear my bandana amongst the thronging masses… and while I have yet to open my post-race food, I’m also a little scared to.  That clown on the wrapper seems to be the stuff of nightmares.