Skip to content
Would you rather…?  It’s a game where two choices are presented and you have to choose.  Sometimes it’s a choice between the lesser of two evils; sometimes it’s a choice between two E Ticket options.  It’s never supposed to be obvious – if it is, then the question is either flawed or about coconut and coconut is terrible and could kill me (not really but I really, really hate it) so I’d almost always pick the non-coconut option.
That’s all contextual background to explain my mom’s toughest “would you rather…?”  Would my mom rather have Dr McCoy’s hypospray from Star Trek that could cure pretty much everything with a “pfffft” or would she rather have the Enterprise’s transporter so she could just “beam” to some exotic location.  Whenever somebody she loves is sick, it’s the hypospray no question because Mom is awesome and always would prefer her own suffering to having somebody else endure pain.  But get her on one of those crazy transcontinental seemingly never ending flights and she will exclaim, “dammit, Kevin!  I’m a person not a fedex package!”  Actually she wouldn’t say that; I was trying for a Dr McCoy witticism but those are really hard to write.   Anyhoo, Mom would actually say as we were crammed into our economy cabin seats, “When in the heck are we getting a transporter?!”
As I sit cramping up on this 13.5 hour trip from DC to Addis Ababa, awaiting a 3 hour layover before another couple hours to Kilimanjaro, I’m thinking, “Dammit, Kevin!  I’m a person not a pretzel.  Where in the hell’s my transporter?!”  Like I said, not easy to write those McCoy-isms.
The morning started at Dulles wherein I thought, hey, I’ll skip the escalator since I’ll be sitting such a long time… 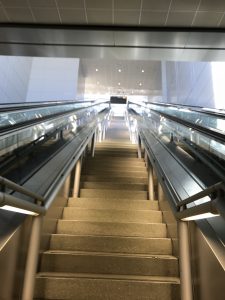 Halfway up these stairs I thought, “why the hell am I waking up these stairs?!”
Apparently I’m a salty traveler, often invoking the Judeo Christian notion of a land of damnation.  Huh.
But I digress.  The check in line at Dulles was ungodly (there I go again)… 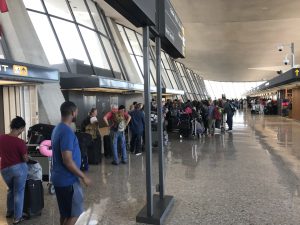 …and the concession thieves were charging different rates at different ends of the temple… er, terminal.
I posted this comment to Facebook:
In my version of YOJIMBO, I would pit the Hudson News at gate A31 against the Stellar Partners at B81. “Ya know, Stellar sells their sodas for 6 cents less than you… maybe you ought to sell it for $2.28…”. Then I’d go to Stellar and get them to cut to $2.27… and so on … and so on… until I was the last man standing with a reasonably priced bottle of Diet Coke.

And shoutout to Rick Ward for the brilliantly funny reply, “I prefer the sequel: The Coke, The Tab and the Pepsi.”  Well played, Rick.  Gold star.  Big blue thumbs up.
And now here I am tapping on my iPhone notes app trying to capture insights or memories.  But here’s the thing… it’s just me flying.  Another day, another airport, another crappy inflight meal, another teeny bottle of alcohol.  I suppose though that’s true of my marathon posts – another weekend, another race, another 26.2 miles, another bottled water.  But hopefully the devil’s in the details and there’s some fun to be had in the moment, even if you feel like you’re stuck in a moment that you can’t get out of for many, many hours yet.
I binged and caught up on “Arrested Development” and thus burned out a bit on having earphones shoved into my ears.  I’m having trouble reading, my eyelids fluttering, and my body is questioning the hour since time is a construct that has lost all meaning up here at 38,000 feet.  Yet I can’t sleep.  I am, as I said, pretzeled into this seat.
I did get to meet in person the trip organizer and Mt Kilimanjaro Race Director Ms. Marie Frances before we boarded.  She seems a lovely hearted woman and a fascinating, true character.  I look forward to posting more thoughts and stories as the week progresses.
I also met a few other climbers/runners.  Some brought suitcases full of climbing gear and donations.  I’m feeling sheepishly ill-prepared both for me personally and for contributing to the local community we are visiting.  But the good news is it so far looks like I’m with a group of good hearted souls.  There’s comfort in my being the jerk of the group.  Makes it easier on me.
My $2.49 mini parka by the way has a broken zipper… which they conveniently left in my pocket.  What am I?  A magician?  Or a tailor?  That’s the same thing sometimes… but I am sadly neither at any time.  Ya know what? That’s not true.  I have been known to magically get a nose or two. 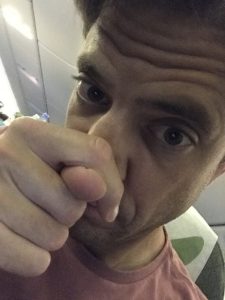 ***
Pardon my mix of sci fi, but where the frak is my frakin’ transporter?!  For frak’s sake!  How much frakin’ longer is this mother-frakin’ flight?!
Sorry about that.  Tension breaker.  Had to be done.
Answer: Six hours, forty two minutes. 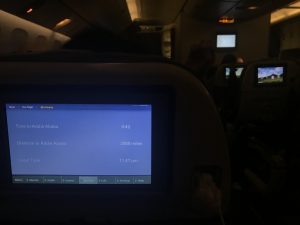 Spuck. (*)
* Years ago I wrote a tech noir novel called Space Spy.  In it, my invented curse word was “spuck.”  I did a lot of “Astral-this” and “Space-that” to make it sound sci-fi-y.  I suspect you may not give a flying fig about this but in 1980s tv classic “Moonlighting” terms, I also suspect you know exactly now what “spuck” … and “flying fig”… means.
***
You hear a lot as people congregate in the galleys (FAA rules be damned) trying to stretch legs, rehydrate with a plastic cup shot glass of H2O, and pass the time as the minutes pass slowly but the miles go flying by.
A special needs school psychologist is headed to a five week African adventure; her mother was supposed to be flying with her but had emergency gall bladder surgery; she’s recuperating and is only missing the first week, and is now cleared to join in Mozambique.
A retired military mom is taking her soon-to-be 16-year-old son (as of this coming Tuesday) on a service trip to Madagascar because he’s always been interested in lemurs.  Her recently college graduated daughter went with her to Nepal last year.
A John Hopkins Public Health grad student is headed to Zambia to intern at a clinic specializing in assisting AIDS patients managing their own care in small communities.
A mother is meeting up with her daughter in Cape Town, her child excited to show her around the place she’s been studying abroad this past semester.
A 13-person missionary group headed to Ethiopia was struggling through a forced overnight and a rebooking for today; it took ten 30-minute delays yesterday before the airline opted to cancel their flight and put them up at a hotel.
***
Arriving in Addis Ababa, I realized the rumor that had circulated through the plane was false.  Some know-it-all passenger said they didn’t have any chairs at this airport.  There were chairs.  And long queues mainly because we all thought we should be at our respective gates early.  The attendants kept insisting we should wait to go through the security scanners half an hour before our flight, but it had taken us 45 minutes to get to that point.  Yet I noticed as we boarded our plane that the security line was indeed nonexistent and you could just walk right through.  I guess we all should’ve listened.  But it wasn’t just me as an ugly American know-it-all – for the record I always thought they’d have chairs at the airport, albeit I also assumed like all airports in the world they wouldn’t have enough chairs for all the passengers — no, no.  Passengers with every sort of passport poo-poo’d the 30 minute warning and that’s why the queue got jammed.  A pox on all of us.  All are punished.
I did meet the rest of Marie Francis’s group.  I’m bad with names so already have forgotten most of them but all told there’s supposedly 13 of us traveling with a few more joining later.  I’m the only solo traveler and thus get a single room tonight … though I will be sharing the huts as we ascend Mt Kilimanjaro.
Here’s a group shot of us in the Addis Ababa Airport: 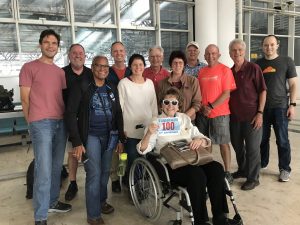 We experienced an hour or so delay sitting on our flight due to an a/c technical issue.  It got really hot sitting there but not once we were airborne i guess they must have really, really fixed it; it was as if we were in a flying ice chest.
This does not bode will for my nights on the mountain.  Indeed, chatting with folks about their preparations and supplies, I think maybe my laissez-faire attitude could be a disastrous anti-strategy.  Time will tell.
What I will never know is just what this thing was on my inflight meal tray.

I took a bite (gotta try everything, right?) but it was… as good as it appears in this photo.  I could not place the texture, the tastes, nor the raison d’être.
So it goes on the road to Zanzibar… 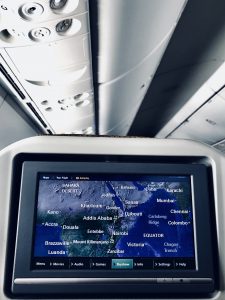