There aren’t any photos from the run itself. I was too busy trying to focus on one foot in front of the other… a fool’s quest given the results.

I would say it’s odd to finish a marathon and not have that runner’s high, that elation at having done something in the morning. But to be honest, I haven’t had that feeling in the last few events. I don’t know if all those lame high school health class industrial films on the dangers of addiction apply here; I suppose it makes sense that as usage explodes, so too does one’s tolerance, that in order to get that same level of high one needs to get more and more of the product. I can’t imagine running more than I do and yet… the withdrawal, the need for a fix remains strong and the desperation… the desperation rises.

So too does the depression. I could wax poetic about the learning process of failure, that setbacks breed understanding and innovation. There’s that chorus of validation for failure within Meet the Robinsons (2007):

But ya know what? I didn’t learn anything from today that’s useful. The conditions were right, the course was right, but I just couldn’t do it. I ran with a sub-3 hour makeshift pace group (there was no official one today… no sign on a stick being pumped by a neon bibbed muler who typically runs at a faster pace but has slowed to help others get to their target times). The opening 2.5 miles was through a pitch black tunnel and not all of our GPS watches could maintain connection — everybody’s was just slightly different too. And s somewhere around the halfway point, when we all thought we were a little ahead of the pace band requirements, we realized we were in fact a few seconds behind. It broke me. I just couldn’t go on. I had I thought banked time for my inevitable second half fade but in truth I’d need to do a negative split and run faster in the second half. The fellas around me said this was easy, that the course actually got progressively more downhill in the closing miles and we could make up time there.

That did not happen for me. As the miles took their toll, as the sands of time slipped the hourglass, the pace group pulled farther and farther ahead of me… until they vanished off the horizon.

No matter what I tried, I just couldn’t go any faster… and I couldn’t stem the ever slowing pace I found myself keeping. Miles started taking 7 minutes… then 7:15… then 7:25… and this is when we hit the supposed “downhill express” section. My pace went to 7:35, 7:40 and I just couldn’t recover.

Three hours clicked by around 25.8 miles on my Garmin watch. By the time I made it to the finish, my PR was blown and I was a shell of a man. Things did not improve as I stumbled to the bus to ride back to the parking lot. As I was pulling out of the field they had parked us in, a cop yelled at my for driving on the roadway. “Don’t you see the pink tape?” he sniped. I did… and it looked like it was marking off the grass and I should in fact take the asphalt to exit. But apparently in the infinite wisdom of the bureaucratic world, the asphalt needed to be protected and they wanted us to drive on the grass.

I tried to see a few more Twin Peaks locations but my heart just wasn’t in it. I drove out to Shelly and Leo’s house, now a private residence that the unofficial google map maker asked we treat with respect; the owners were obviously nicer than Leo Johnson but, ya know…. 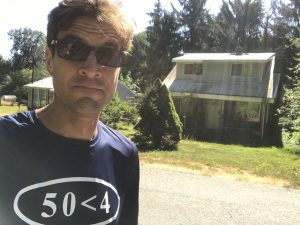 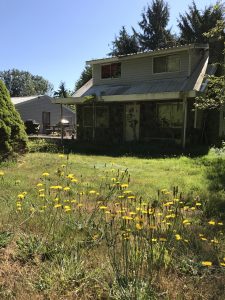 It was still a a little too early for lunch and my “treat” of failure pie at Twede’s, so I stopped at this massive log. Apparently this is in the opening credits of the “Twin Peaks” pilot but that’s all.  The town of Snoqualmie have erected a security fence around it in recent history, making photos a bit challenging. 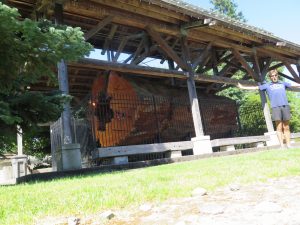 Nearby was the infamous gazebo, site of an aborted meeting between Laura Palmer and Dr. Jacoby. 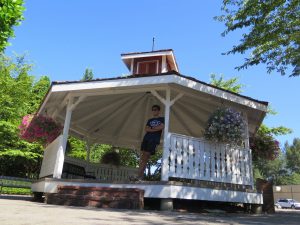 I should note that there was an antique store not too far away that was really missing out on offering golden shovels to cash in on the return’s infomercial within episode 5:

At 11:30 AM, I headed into North Bend, WA, to grab a slice of pie but apparently the Twin Peaks Festival and everyone within a 30 mile radius had the same idea.  The line was out the door and it just seemed… impossible.  My plans once again prove fruitless in more ways than one.

I then thought I’d try a place a runner mentioned on the bus ride back to the parking lot.  They raved about the Salmon Salad and I thought that sounded pretty good… but when I sat at the bar to order, the bartender handed me a menu and then took it back telling me, “the kitchen is currently transitioning from breakfast to lunch so they’ll be closed for the next 45 minutes.”  Lunch: 2, Kevin: 0.

I noticed a burger stand across the street that according to local papers had the best burger in North Bend.  It was decent but it took me 35 minutes to get it.  I don’t know if that’s because it the guy working the register’s first day or if maybe Scott’s Dairy Freeze was transitioning from breakfast to lunch and the kitchen therefore was running behind.  But the lunch was mostly a disappointment making the final score Lunch: 3, Kevin: 0.5. Despite needing a shower, I dreaded the 45 minute crawl back to Seattle due to “delays from the usual traffic.”  So I opted to try and see two or three final things in town.

My efforts to locate the Bookhouse Boys hangout behind the Roadhouse proved… oddly incomprehensible.  This may be it… or it may be a beer garden gone to seed. 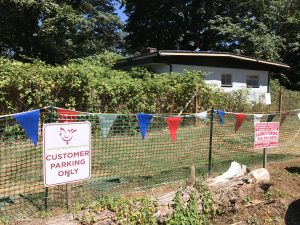 And Hap’s Diner, one of my favorite locations in Twin Peaks: Fire Walk With Me (1992), has fallen on hard times: I’ve returned to my AirBnb and grabbed a shower.  It’s now 2:57 PM.  I’m typing this up.  I know Moon Shots are by definition wild leaps of faith, effort, and hope to try and hit a new record, goal, or high.  But as I said above, I failed in all of those cases.

I’m not sure I’ll even go to tomorrow’s Jack N Jill Downhill Marathon Day 2.  What’s the point?  I’m hurting from today, both physically and emotionally.  I’m feeling incredibly pessimistically fatalistic about humanity as a whole.  Some of it has to do with the heads of state around the globe who seem all-too-willing to destroy the world in order to preserve a bizarre “way of life.”  The ironic paradox is lost on them that by destroying the world, be it militaristically, economically, socially, or any other adverbian -ly, there will be no way of life to then carry on.  On top of that, be it a reflection of those mindsets or a harbinger of more, society as a whole seems ever more isolationist, mean, rotten, and self-centered.  It’s all leaving me feeling like nothing matters which from an existentialist standpoint should be freeing but requires a final leap of, if not faith, then resignation that I can’t quite bring myself to take.

By the same mindset though, I suppose what’s the point in NOT going tomorrow morning?  Would I just wait around in this airbnb, killing time as I continue to wait for time to kill me?  That doesn’t seem productive or helpful in circumventing let alone conquering this funky ennui.

I’m going to take a nap and see if that helps.  Awakening from such things usually has me in a worst spot than before but I just feel a heaviness that I can’t escape.  I know I should go and explore Seattle; the Fremont Troll is very near here.  But I visited him in 2011 when I ran the Rock N Roll Seattle Marathon and decided Seattle was one of the least friendly cities I’ve ever been.  That’s an entirely different tale, from… Egon Spengler!… six plus years ago!

I did however amble out yesterday and see the still controversial giant Lenin statute that was salvaged from its toppling in Slovakia by its people in 1989. 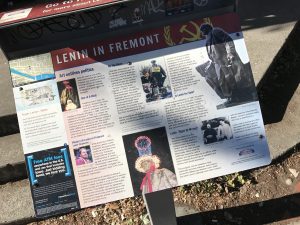 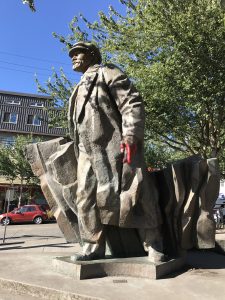 We will see what happens tomorrow.  Maybe I’ll take some photos.