“Mercury is in retrograde.”

This is what my friend said as we struggled to find parking earlier this week. From street cleaning notifications to permit only to loading zones, each “open spot” proved to be an illusion. I was familiar with the phrase but I guess I really didn’t know the details behind it. She explained that because of our points of view and the angles of orbits, three times a year Mercury appears to be orbiting backwards. It’s not really but it LOOKS like that… hence three times a year there are a series if annoyances and frustrations where things just are off kilter. Not as extreme as Murphy’s Law it’s more akin to death by a thousand paper cuts. But for me this week it’s been more like death by twenty thousand paper cuts.

I say this because it wasn’t just parking dis-karma that happened this week. There were irrational conversations that made no sense, unreturned emails and voice-mails that when I followed up had people offering solutions in direct opposition to what I had said. An example of the latter – I was trying to make a sports medicine appointment for sometime on June 6th, 9th or 10th. When I explained this the scheduler offered me a time on June 8th. I had to explain again that I wasn’t available on that day. Not cataclysmic but just… off.

Mercury is in retrograde..

So it is that I find myself in Salem, Oregon, for the Willamette Valley Marathon. And things are just… off.

I had already screwed up my rental car, prepaying for an express deal last minute car as I thought I had inadvertently reserved a car downtown and not at the airport. In truth, I wound up paying 50% more for the exact same car as it turned out I HAD reserved at the airport.

Packet pickup proved, um, a small affair. I guess I hadn’t realized just how small this race was going to be. I believe all told there were 107 of us running the full marathon, albeit more were doing the half and 10k. Still, I needn’t have worried about getting things sorted. 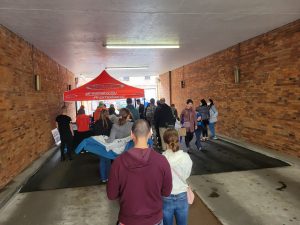 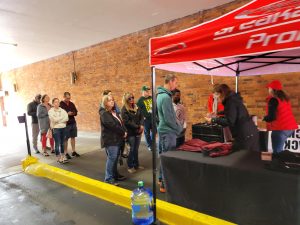 There are only a few points of interest on Roadside America for Salem… not counting the fact that for a franchisee of the Salem brand they apparently failed to burn witches here. I mean, that’s like a Burger King without the Whopper or a McDonald’s without the Golden Arches. Who signed off on this?

Instead I made a pilgrimage to the grave of a most famous cow (inexplicably buried outside the Hall of Poultry at the Oregon State Fairgrounds). 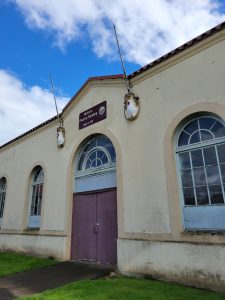 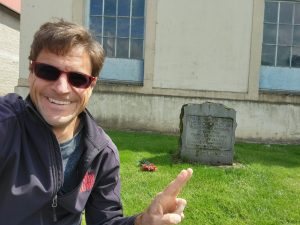 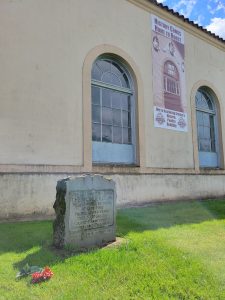 And then I wandered over to the local amusement park, hand crafted by a local entrepreneur and Walt Disney-ish fellow by the name of Roger Tofte.  Alas, I was too cheap to pay the $22 admission fee plus the individual ticket prices for attractions (shades of E tickets). Besides, I had gotten there about 45 minutes before closing… and I couldn’t even figure out how to go in. Everything was marked exit only and hand stamped readmission. I’m a college graduate (albeit with a fairly worthless degree) but I wandered all about unable to crack the entrance code. 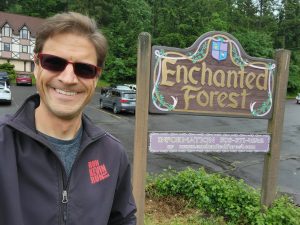 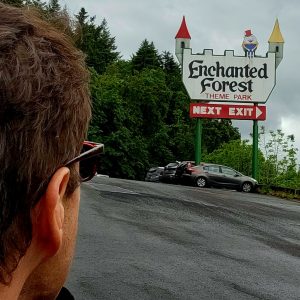 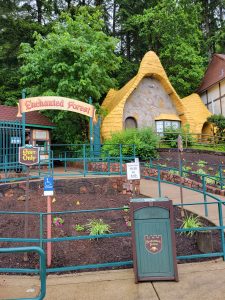 Salem is of course the state capitol of Oregon… and the state house features a golden superhero dome topper, the brawny woodsman known as “The Oregon Pioneer.” I would have preferred seeing General Sarah Alder from Fort Salem but again that might be in Massachusetts. Perhaps the most off thing was my hotel room. I mean, I deserved it… and the sign kinda warned me… 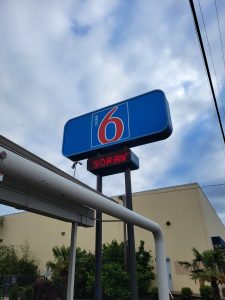 Once inside, well, the view afforded me a front row seat to passing trains, both commuter and freight, which ka-chunked by all through the night. Not the most restful of nights. To make matters a bit worse, my phone charging cable was on the fritz. Fortunately I was able to squeeze out enough juice to capture the coat rack lock placed by a pair of lovers. Truly nothing more romantic than a Motel 6 on the outskirts of town! 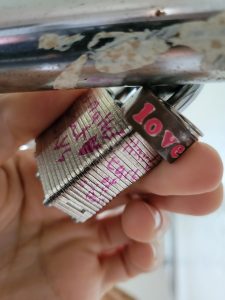 But how was the run? Fine, maybe even good. The rainy forecasts fortunately proved wrong… honestly the mud was bad enough from the previous evening. Had it been pouring I suspect my shoes would’ve been completely sucked down into the mire. As it was I had to gingerly step to avoid slipping and falling for a mile or so each lap. 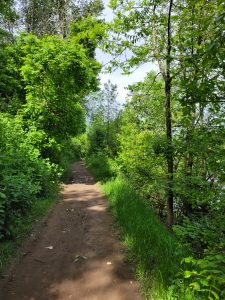 On the plus side, I didn’t get misdirected on the course, something that did happen to a large number of runners behind me. Not quite sure how that happened as it wasn’t that complicated… but then again, ya know, Mercury is in retrograde. In the end, I ran a 3:20, which wasn’t a BQ time and might explain why I only ranked 5th in my age group. I was 7th overall so, ya know, this wasn’t a young person’s race I guess. Maybe that’s because the end of the race led into the local Wine Festival. Race registration got us a free meal at one of the food trucks and 6 small pour samples of any wines on offer. As is often the case with such fare, there were long lines with 10k and half marathoners crowded round leaving marathoners waiting quite some time to get food. I opted for some tacos as it was the shortest line and it still took about 30 minutes. The food voucher was valid up to $7; the taco plate was $8. I had to scramble to get back to Portland Airport within my one day rental period… and I would have made it were it not fo having to wait for an attendant to pump my gas (Oregon and their sillt full serve only rules!) and then there was a train crossing (!!) just outside the airport.

Hopefully before next week’s even more crazed scheduling for a race in Colorado. But more on that as the time draws near.

For now I need a nap.